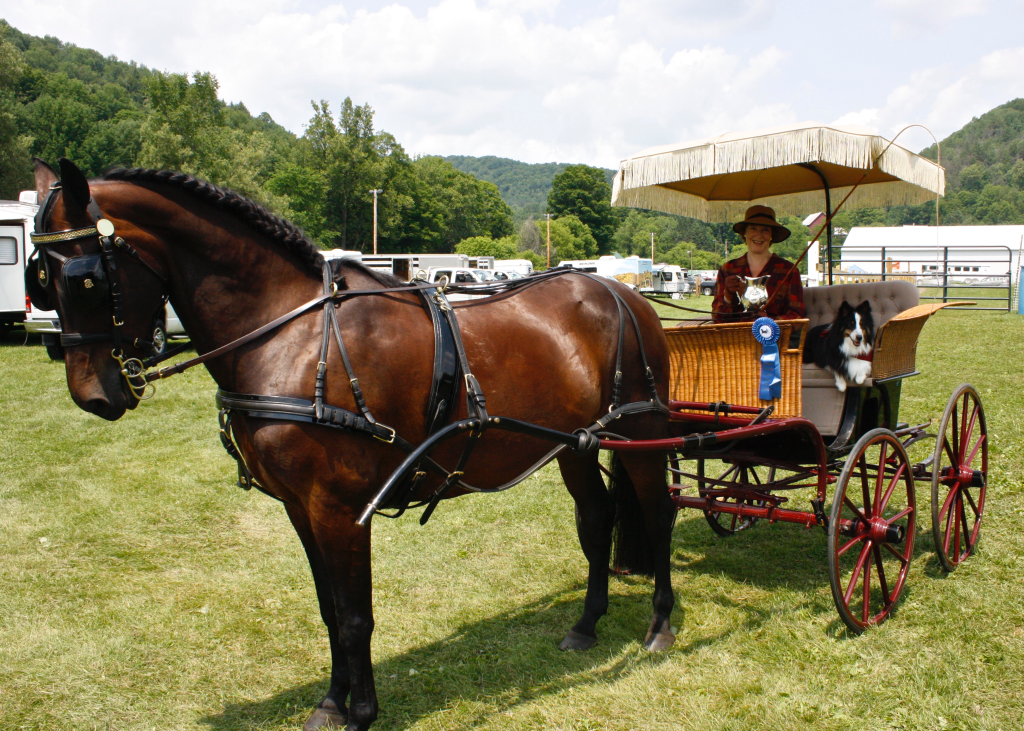 “Let me win. But if I cannot win, let me be brave in the attempt.” Those words, spoken by Eunice Shriver at the start of the first Special Olympics, in July of 1968, were in my mind as I entered the ring with my horse, Lucky, at the Vermont Morgan Heritage Days’ carriage driving competition.

When Lucky was five months old, he had a serious injury that nearly cost him his life. Healed and now in his tenth year, this competition marked his miraculous recovery. It also gave me a different perspective on winning.

As a five month old he caught his hind leg in a barbed wire fence while jumping it, and ended up twisting his spine. Despite daily physical therapy for the next three years he only straightened out part way. I thought he had learned to live with the pain because he didn’t show it. He let me hitch him to a cart at age two, and I started riding him at age three. He learned quickly and was willing to do whatever I asked of him.

All that changed the day I stopped suddenly with Lucky in the trailer. The jolt had brought him beyond his tolerable threshold of pain. When he backed out he became an angry, dangerous horse, charging people in the field, trying to bite or kick at everyone except me. Perhaps I was exempt because I had imprinted him at birth, and I was the one who cut him free from the wire around his right hind hoof.

Lucky became so unpredictable that I knew I would either have to put him down or see if my horse-whisperer friend could help. She agreed, and within a week she called to say that, of the ten most dangerous horses she had ever dealt with, Lucky was number one. For the first time I questioned the wisdom of the name I had given him.

Lucky spent ten months with Sue and John, getting weekly acupuncture, chiropractics, massage, and behavioral training. Some might call it a horse spa, but for Lucky it must have felt like forced labor. After many protests, he learned to trust again, that humans were here to help, not hurt him. I visited once a month and every time he came up to me as if greeting a long-lost friend. There were many tears. I was in awe of his willingness to heal. In June he came home.

Lucky never tried to bite or kick anyone again, but I had to start him over. His body was no longer in pain, and his back was straighter, but he had such a weak hind end that he couldn’t move faster than a slow walk. That was five years ago.

I could hardly believe this was the same horse now pulling Paul and me in my mother’s favorite basket phaeton carriage, which I had inherited after she died in 1996. There were ten other contestants in the pleasure class, pictured below. We won. 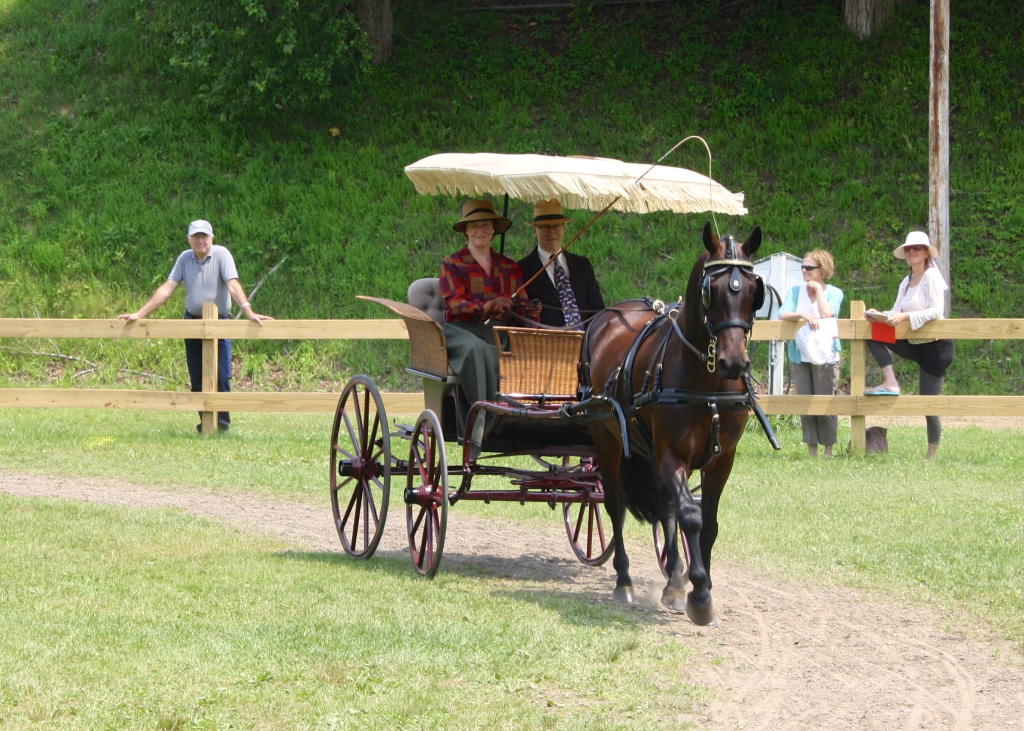 I also entered Lucky in a training level dressage test against at least twelve others. This class was judged on the movement of the horse, as well as the way he bends with curves. We won that too. The dog-in-carriage class had only one other competitor and my horse trainer’s dog stole the show! Ironically, for such a small class we won a trophy in addition to a blue ribbon!

In one class we had to go through as many pairs as possible in ninety seconds. In the other, we went through ten pairs of cones in both directions. In both classes we did not knock down a single cone, which would have penalized us by three seconds, and Lucky kept up his fast trot, as if he was having the time of his life. We won them both!

I am competitive, and I like the game of seeing how well I can do, but I was so happy to see my horse so happy that I didn’t even think about the blue ribbons. It was a great surprise to learn at the end of the day that we won five classes.

Lucky was once a very unlucky horse. But what is “lucky” after all? And what is winning? I came away from the day realizing that for me, being lucky is having a second chance, and winning is being brave enough to do your best, whether or not you get a blue ribbon. 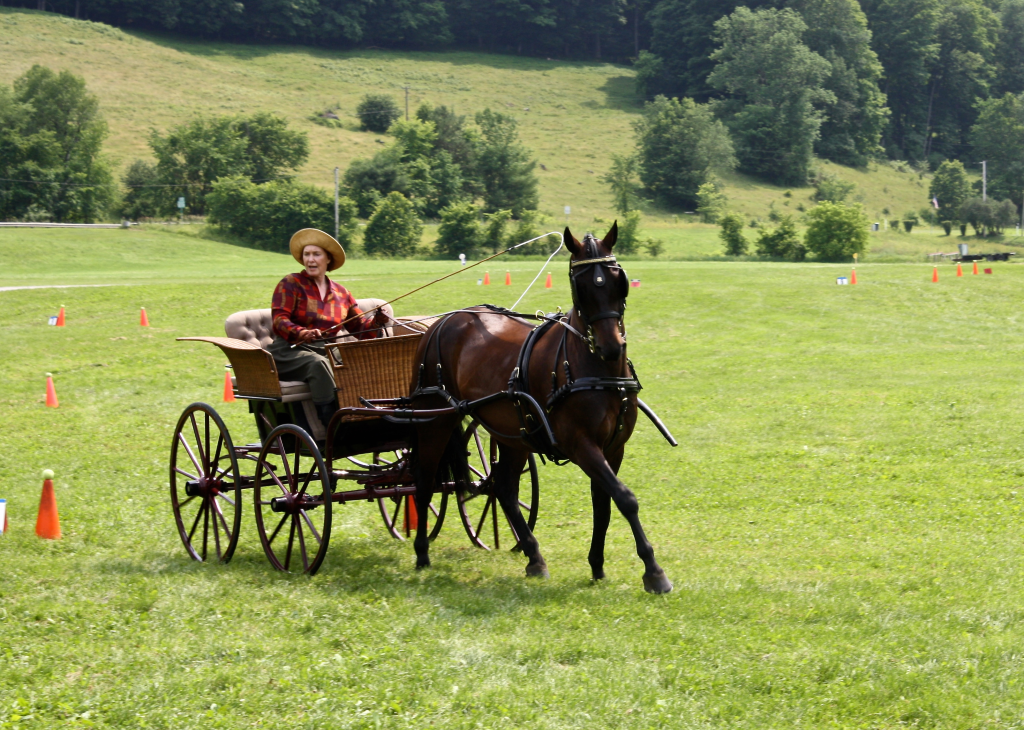 What does winning mean to you?

This entry was posted in Eileen's Armchair and tagged horses. Bookmark the permalink.

14 Responses to On Winning