Singing to the Morning Star 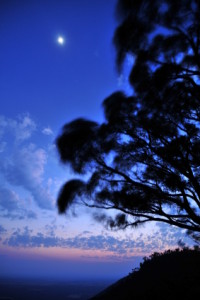 This morning I was in my hot tub before the sun rose. I think I woke the birds from yodeling to the last visible star among the cotton batting of clouds. Why was I singing? Because I’m still exulting in a letter I received this week from my third grade “spelling and word study” teacher at the Chapin School. She had seen me on CBS Sunday Morning, and read my book. Her words evoked a memory as distant as the lone star, but her story illustrates how children can absorb distorted reflections of themselves that sometimes last for the rest of our lives. I came close. Excerpts from the letter below are shared with her permission:

I happened to see Charles Osgood’s CBS Sunday Morning show a few weeks ago, and to my surprise and delight, I saw your segment. I immediately ordered your memoir and have just finished it. Do you remember third grade in 1961 at Chapin School? I was Miss Hamlin then and had you in a “spelling and word study” class.

I wept through much of your beautifully written memoir. I knew you were shy, but to me that was endearing. Knowing now why really saddens me. I had no idea you were dyslexic—I don’t think anyone knew then how to deal with it, but I feel I let you down. I can see why your “mum” took you out of Chapin and Brearley. How wonderful the North Country School was for you, and what a triumph your journey has been!

As you see, I have enclosed a copy of a drawing of your pony Tiny Tim that you gave me in 1961. I want to keep this original, but I am sending the originals of two poems; though not signed, I am sure you wrote them. After reading your book, I am even surer of it. Am I right?

Your spelling may not have been correct, but your phonetics certainly was! To me your creativity at nine was astounding and has certainly proven more so now! The poems included in the memoir were awesome. I hope you will have an edition of all of your poetry published. If so, you might want to include these very early ones.

You wrote that being the last of six children made you feel so alone and starved for love and attention. One of the very special memories in my life was in March of 1961, and it was also an occasion that I feel validated your parents’ love for you. Your mother had invited 23 of your classmates and me to come on a Friday afternoon in March to celebrate your ninth birthday. I arrived by taxi with my present, an Origami paper folding kit. The taxi driver called to me as I started toward the entrance, saying that was the service entrance and I needed to go up the stairs to the main entrance!! Thus, the beginning of my afternoon at the Rockefellers!!!

We went into the living room, where your mother had hidden peanuts behind those museum art works and among all the priceless artifacts! Whoever found the most got a prize. After other fun games we went downstairs to the dining room where the table was set for 23 children with me at the head! Your mother and also your father, instead of sitting down with us, helped serve the meal. I’m sure it was your menu selection, for large silver trays of hotdogs, green peas, and spaghetti were served; then came dessert of birthday cake and a large silver punch bowl with many different flavored scoops of ice cream.

I still have the little white poodle marionette you gave me as a party favor! An appropriate individualized gift was given to each child, too. I was moved by the down-to-earth out pouring of love and care shown by your parents that day, and I’m so glad that now, through your long courageous journey, you have finally realized you are and were loved.

If I had a wish to place upon a star, surely the message from this story would be on top of my list.

Early on I got my messages as mixed up as my spelling. At age nine I still spelled “Mummy” with only one “m’ in the middle. My siblings, who each suffered in their own ways from scarcity of attention—confusing attention for love—convinced me that my mother didn’t love me. Their truth was no more certain than a star dipping behind a cloud, but Miss Hamlin’s letter has proved to me that my mother’s love was, and is, as sure as the morning star.

Next time you doubt how much or whether you are loved, look up at the sky. Each star is a symbol of love. See it, winking at you.

• What stories have you told yourself that you might want to question? (In other words, how did you adapt from your true self as a child to stay safe in your family? And how does that continue to influence how you are now?)

• How have they served you? (It’s important to acknowledge their value, for they likely protected you, and are probably useful in forming your purpose in life. For example, my worry about my mother’s love kept me striving for connection.)

• What is your new story? (Who would you rather be?)

7 Responses to Singing to the Morning Star