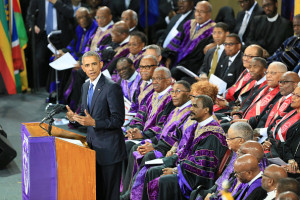 In the aftermath of the recent racially motivated shooting in Charleston, South Carolina, I feel the weight of systemic prejudice and racism, still alive in our country today. I’ve been reflecting upon President Obama’s eulogy for one of nine victims, the Reverend Clementa Pinckney.

President Obama said the murderer might have hoped that his act would “deepen divisions that traced back to our Nation’s original sin.” I have never heard slavery referred to in this way. It feels right if his statement also applies to crimes against Native Americans and other similarly oppressed people.

Although slavery was outlawed a long time ago in our country, many people are still entrapped by the color of their skin, and struggle to overcome systemic disadvantages put in place by our dominant predecessors. It has me wondering what privileges and benefits I have received unknowingly at the expense of enslaved and oppressed people. In what ways am I contributing to the status quo?

I’m embarrassed to say that only recently have I begun to contemplate all of this. I can’t help feeling guilty about the actions of those who preceded me. Today, the descendants of oppressed people still contend with limitations and prejudices put in place hundreds of years ago.

I hope the shootings will ultimately force us to confront how prevalent these ongoing problems are, and that we commit ourselves to seeing each other’s experiences more clearly.

The recognition of African American suffering is just the beginning.

Like President Obama expressed in his eulogy, I share the hope that this incident will motivate us to treat each other better and begin to heal this centuries long wound.

What ideas do you have to help address this problem?

This entry was posted in Eileen's Armchair. Bookmark the permalink.