Things That G0 SPARK in the Night 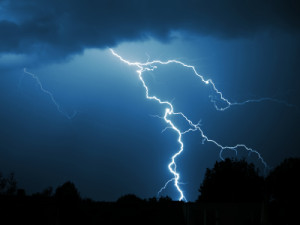 It’s almost the 4th of July, and I woke up this morning wondering how many things from nature give sparks of light at night. This June in Vermont we have had frequent thunder and lightning storms. I sit on my window seat at night and marvel at the vertical and horizontal bolts as I watch the lightning unzip and zigzag through the sky.

In between the storms, when the air is humid and the wind is napping, I look for fireflies at night. Also known as lightning bugs, they are actually beetles, members of the family, Lampyridae.  Their lights are a means of attracting mates, or warning off predators.  An imature form of firefly is the glow worm. This invertebrate lives in woodlands and caves around the world and can even be found inside the Arctic Circle. It uses its bio-luminescence just as fireflies do, to attract mates. We humans have created headlamps to light our way at night, but as far as I know, none of them have been successful in attracting a mate!

I go to the Atlantic Ocean every August. Occasionally, I row out to a boat at night.  If I run my hand through the cold water, I stir up phosphorescence, the bio-luminescent plankton whose chemical substance is similar to that of fireflies.  One swish, and I see a whole wave of light. It’s thrilling. I look from the effervescent water up to the milky way of stars in clear summer sky and feel like I’m in a sandwich of cosmic light.

In November this year I’m going to Manitoba to watch for Northern Lights, or Aurora borealis. I hope to see the green, red, yellow and purple colors created by collisions of electrically charged particles from the sun that ent 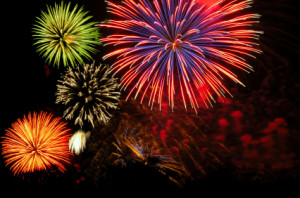 er earth’s atmosphere. To me, all these natural phenomena are the true fireworks of life. Humans have invented thrilling imitations but when I see lightening, fireflies, phosphorescence, or the Aurora Borealis, I feel humbled by the multitude of natural miracles that surround us. May you find a little light wherever you go in the night. Happy 4th of July!

6 Responses to Things That G0 SPARK in the Night