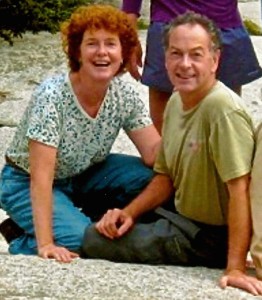 I’ve been thinking a lot lately about how to find peace after a loved one dies.

Two weeks before my brother Richard’s death, several family and friends said he told them he finally felt complete in his relationship with me. For Richard, completion appeared to be about peace. I too have had a growing feeling of peace with him, but something felt incomplete until a few days ago.

I want to share my progress towards wholeness with him, and I hope to learn from your experiences with your own loved ones.

My July 1st post refers to the door in the woods that Richard and I built on our family island when we were teenagers. I wrote about the door in my memoir. It was the only project throughout our lives that we did – just the two of us – until shortly before his death, when we found ourselves scheming to co-host a first-ever McGrath cousins’ reunion. Our mother and her brothers had not encouraged cousins’ gatherings. The only time we saw her family was at funerals. This communicated that it was moreimportant to show up at death than at life.

In our adult lives, Richard and I had worked hard to heal relationships among ourselves, our siblings, and our extended Rockefeller relatives. The McGrath reunion was an opportunity to find balance with the other branch of the family.

My oldest McGrath cousin, Grace, and I first cultivated a relationship after she came to hear a talk I gave at the Cosmopolitan Club, in 2009, in which I impersonated both my grandmother, Abby Aldrich Rockefeller and my mother, Peggy McGrath Rockefeller. 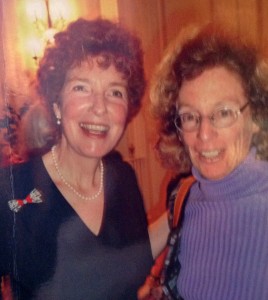 Grace enjoyed my antics, perhaps because she too embodied the McGrath “spunk”. We stayed in touch afterwards by email, and occasionally by phone.

Two years after we shared laughs at the Club, Grace was diagnosed with terminal bone cancer.  She told me she was in a lot of pain, and dealing with anxiety about prognosis. I shared this with my siblings, and encouraged them to be in touch with her.

Richard, the doctor in our family, responded, asking if I thought she would be open to talking with him about ways of coping with her anxiety.

I said yes, but suggested that they talk in person. Grace was just two years his senior. I had a feeling she would appreciate his humor, and might benefit from his medical wisdom.  A month later, he flew his Meridian plane to Southampton, and spent the day with her and her family. It was her 67th birthday.  I spoke to Grace that night and she thanked me for encouraging him to come.

Grace died two days later. Richard attended her funeral, along with Paul and me. She had been the first in our generation to die, and was another McGrath who we had scarcely known in life.

Richard and I talked about how nice it would be to do a McGrath reunion this August, on our island in Maine. It would be an opportunity to get to know other relatives on that side of the family. He spoke to our father about it, and Dad enthusiastically agreed to arrange for their transportation. We set a date, and I agreed to draft the logistics. That was as far as we got.

Now with Richard gone, almost two months to the day after Grace died, I wondered whether to continue with the planning. Surely the McGrath’s would understand if I called it off, but a voice inside has persisted, saying, “Do it!”

I sat with the voice and asked, “Why?” The answer eventually came: Because continuing to plan this reunion, even without Richard, is a way of honoring him, and of finding peace in our relationship. I have always wanted to do another project together. While the idea sprung from both of us, this time I will carry it to completion.

We will gather together this August as planned. Perhaps we will build a new door in the woods. The project of working together could leave behind the old pattern of showing up at death, and open us to a new blueprint of celebrating family while we live.

At dinner together, we will raise a glass in gratitude for Grace and Richard. They got us started.

What ways have you come to peace with loss?

21 Responses to Coming To Peace