“Cousin Jules” – a Movie For Meditation 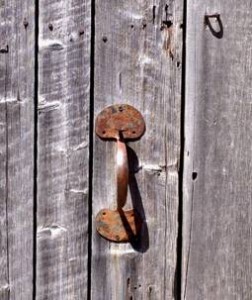 The ping of a hammer on steel is an unforgettable sound. I used to equate it with farriers, shoeing horses. When my son became an artisan blacksmith, I learned it is also the sound of hammering hooks, hinges and door handles. Upon hearing that a film called “Cousin Jules” was about a blacksmith, my husband bought tickets to a small viewing. I was tired, and part of me wished we had not committed to going out. By the end of the hour and a half, we were so refreshed and energized that we came home and sent and responded to emails until one o’clock in the morning! The next day, after less sleep than usual, we were still full of energy. What made the difference?

Most movies today are fast-paced with multiple images crowding the screen. I leave the theatre drained. Within a few days, I have forgotten the plot and can barely remember the title. The experience of seeing “Cousin Jules” (which will be available by DVD in late May) is just the opposite. The plot is unimportant, but the cinéma vérité brings you into the life of the French peasant couple in their late 80s. She sits on a chair outside and peels potatoes. He works the bellows of the forge with his left arm so accustomed to the task, it appears isolated from the rest of his body. They eat in silence, but for a few unimportant phrases like, “it’s hot,” or, “You want some more?” (All in subtitles.)

What moved me was the pace and simplicity. Throughout the film, the camera barely left their property, panning out on a few occasions over an unremarkable line of trees along the horizon, and a graveyard upon a hill. Otherwise, it focused on their hands, their faces, and the basic activities of cutting bread, dipping a bucket into a well for water, eating and shaving. You might think it boring, but it was not.

The effect of watching such beautiful cinematography was like meditating for an hour and a half. My mind was clear as we drove home. The usual list of “to dos” had vanished from my psychic terrain of responsibility, and I felt inwardly spacious. Paul and I reviewed little details of the movie as if savoring chocolate truffles. I was reminded of the need for space in every day. Simple pleasures give the deepest benefit. Every moment is sacred.

What do you do to create space in your life?

10 Responses to “Cousin Jules” – a Movie For Meditation