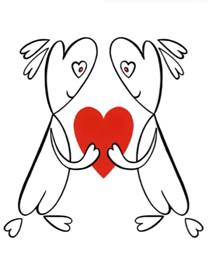 With Mother’s Day approaching, my mind is turning to matters of the heart. Those of you who have read my book may remember the chapter called “Primal Parenting,” where I recount a story about teaching our sons how to have “heart talks.” Today I want to paraphrase an excerpt from that chapter with you.

Our sons were four and two when we first used “The Talking Heart,” as we’ve come to call it. I had recently helped organize a conference on the impact of emotional literacy on children’s health. One of the teachers shared her technique of resolving conflict in the classroom using a red velvet heart stuffed with seeds. I was so intrigued that she gave it to me afterwards as a thank you for convening the meeting.

No sooner had I walked through the door than our elder son, Adam, came running up to me. “Mummy, Mummy. Danny bit me.” Adam held out his arm to show me the red mark on his forearm.” Instead of taking sides or sending Danny to his room, I decided to try out my new tool. I asked Paul to join me, explained the rules and we sat down with our sons in Adam’s room.

“Adam, I’m sorry you were bitten by Danny.” I said sympathetically.  “I want to hear from each of you though, and whoever is talking will hold this red heart when speaking.” They leaned in, eyes widening with curiosity. “Adam, since you got hurt you talk first. Danny, you will have your turn next. Here are the rules: Only talk when holding the heart. Then tell each other …

3. What you would have preferred.

I handed Adam the heart.  He squeezed it in his hands as he began:

“Danny, I didn’t like it when you bit me today. It hurt and I was scared. Next time I would prefer you scream.”

Adam’s suggestion was so age appropriate! Paul and I muffled our laughter as Paul passed the heart to Danny. It looked large clutched in Danny’s two-year-old hands.

“Adam, I didn’t like it when you pushed me off spring horse. I was angry and scared.” Danny paused, and I could feel something shift in him. “Adam, I sorry I bit you. Next time, I will scream LOUD!”

Danny never bit Adam again and we have used The Talking Heart in many variations ever since. Eighteen years later, while in college, Danny mediated between two friends whose argument had escalated to a shouting match. After using the method described above, the two in conflict ended by hugging each other. Danny later heard one of them on a phone saying, “I don’t know what happened. But now I feel like he understands me, and I him. It was the most amazing thing….”

The power of listening and sharing feelings directly cannot be underestimated. If more of us were taught to navigate conflict when young, we would be more effective in our friendships, marriages, corporations and governments. Maybe Congress would even get more done! Tensions get eased by good listening in both directions; honest expression of feelings and direct suggestions for improvement.

When you are in a conflict, what do you do?

If you’re looking for a present for Mother’s Day, you might consider giving a copy of my memoir, Being a Rockefeller, Becoming Myself.  I’ve had many letters from people telling me how my stories inspired them to open a healing dialogue with a mother, daughter, spouse or sibling.

This entry was posted in Personal Growth and tagged Becoming Myself, Being a Rockefeller, conflict, Mother's Day, parenting, Primal Parenting, The Talking Heart. Bookmark the permalink.

19 Responses to “The Talking Heart”