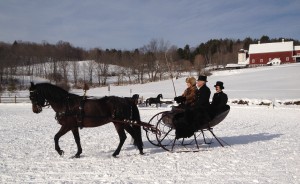 For as long as humans have existed on earth, we have greeted each other. Starting with a grunt, utterances of some kind have announced one’s arrival since the beginning of time. In Ghana the Twi tribe greet each other by asking, “How is your soul perceiving the world?” In Israel, “Shalom” means “Peace.” in Bhutan they ask, “Is your body well?” In Taiwan it’s “Have you eaten?” We in the U.S. used to say, “Good morning,” or “Good Evening,” but today we most often hear an abbreviated, “Hi.” Greetings reflect a culture. It is the same with sleigh bells.

I have the great privilege of having raised and trained two Morgan horses to ride and drive. In the winter I take them out with my sleigh, complete with bells around their necks. I used to think the sleigh bells were used to distract the horses from occasional sounds of runners scraping bare patches of ground. This past weekend, when I was competing at a sleigh rally, I learned the real answer.

In the old days, before cars, people in northern climates transported themselves in the winter by horse and sleigh. They put bells on their horses to be heard from a distance when driving in the dark. Each person’s bells were distinct. If you stopped by the road, and listened, you could discern who was coming through the woods. Children ran outside when they heard bells approaching, hoping it would be the distinct sound of their father coming home.  Each horse and owner had their own sound.

Here’s the sound of my horses’ bells: Lucky & Meg

If you could create a greeting for this new year, what would it be?

Mine is: “how full is your heart?”