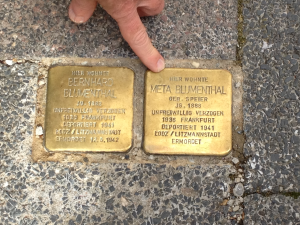 Paul and I have spent the past two weeks in Germany on a roots trip. Happily, our eldest son, Adam, came for part of the time too. Our first stop was Baden-Baden, a beautiful town in the south, known for its mineral baths. It has been a gathering place for artists since the early 19th Century.

We began there because I was invited to be on a German TV game show in Baden-Baden. This is a first for me, but I couldn’t resist the free round trip with two nights at a hotel and a driver to take us to and from the airport! I guess you could say I felt like a Rockefeller!

The TV host claimed that the Rockefellers come from Germany. This is only partially true, for the family is also traced back to the name of Rochefeuille, (or rock leaf) in France, but since I was in Germany I didn’t disavow him of his claim! He later told me, “I like the Rockefeller’s much more than I expected to!” I don’t know what he meant but at least I did not fail as an ambassador for my family. One of the other guests was the grand nephew of Mother Theresa, a very different heritage, yet we both were imbued with the value and meaning of service.

In Baden-Baden we had just enough time to walk along the river and see a few art exhibitions before moving north to towns where Paul’s family had lived. His mother, Ursula, was born in Dusseldorf, Germany and grew up in Cologne until her father foresaw the growing threats of the Nazi Regime and emigrated shortly before WWII, first to Holland and then the U.S. She vividly remembered visiting her grandparents in Nordhausen, a city of about 51,000 today, located in what became East Germany after WWII.

In preparation for our visit, Paul contacted the mayor of his grandfather’s town, Kelsterbach, located next to the Frankfurt International Airport, and also a retired Mayor from Nordhausen who has written a book on the history of the Jewish experience there.  Paul asked both men if we could meet them to learn more about their towns’ histories. To my surprise the three mayors not only greeted us personally, but also planned meetings for us variously with the town archivist, historians, and journalists who wrote articles about our visit. I was not prepared for how important it was to them that Paul wanted to return to a place where guilt still lingers almost 70 years after the Holocaust. This became evident in the hours they spent with us.

In Kelsterbach, Mayor Manfred Ockel showed us brass tiles, called “stumbling stones,” embedded in the streets in front of homes where Jews killed in the Holocaust had lived. Created by a German artist, these tiles have been ceremoniously installed throughout Germany. Each tells the name of a Jew who lived there, when and where they were deported, and the dates and locations of their birth and death, if known. We found the names of Paul’s grandfather’s sister and her husband, Meta and Bernhard Blumenthal, and of his great grandmother as well.

In Nordhausen, we met the former mayor, Manfred Schröter, a retired doctor.  He magnanimously spent a full day with us, arranging first for us to visit with the current Lord Mayor Zeh, two of his staff and two journalists.  Herr Schröter then drove us in the Mayor’s car to the nearby memorial museum and remains of the Mittelbau-Dora concentration camp through which passed 60,000 prisoners from 21 countries between 1943 and 1945. While only 6% were Jews, the conditions for all were so horrific that I am still feeling the reverberations. I was struck by how the beech trees beside the crematorium, fertilized long ago by the ashes of victims, today have grown large, and stand as mute witnesses to the horrors there.

The question that occurred to me going forward is, “what is most life-affirming?” Paul and I are considering how we might make a contribution to Nordhausen to help the youth of today appreciate diversity. We can’t recover what was lost and regretted, but we can go forward with an aim to heal, not only ourselves but also descendants of others involved. The co-creation with people in Nordhausen might form a kind of emotional alchemy.

What are your roots?
What needs to be healed?

This entry was posted in Eileen's Armchair and tagged community, family, Paul, self exploration. Bookmark the permalink.

9 Responses to Looking For Roots