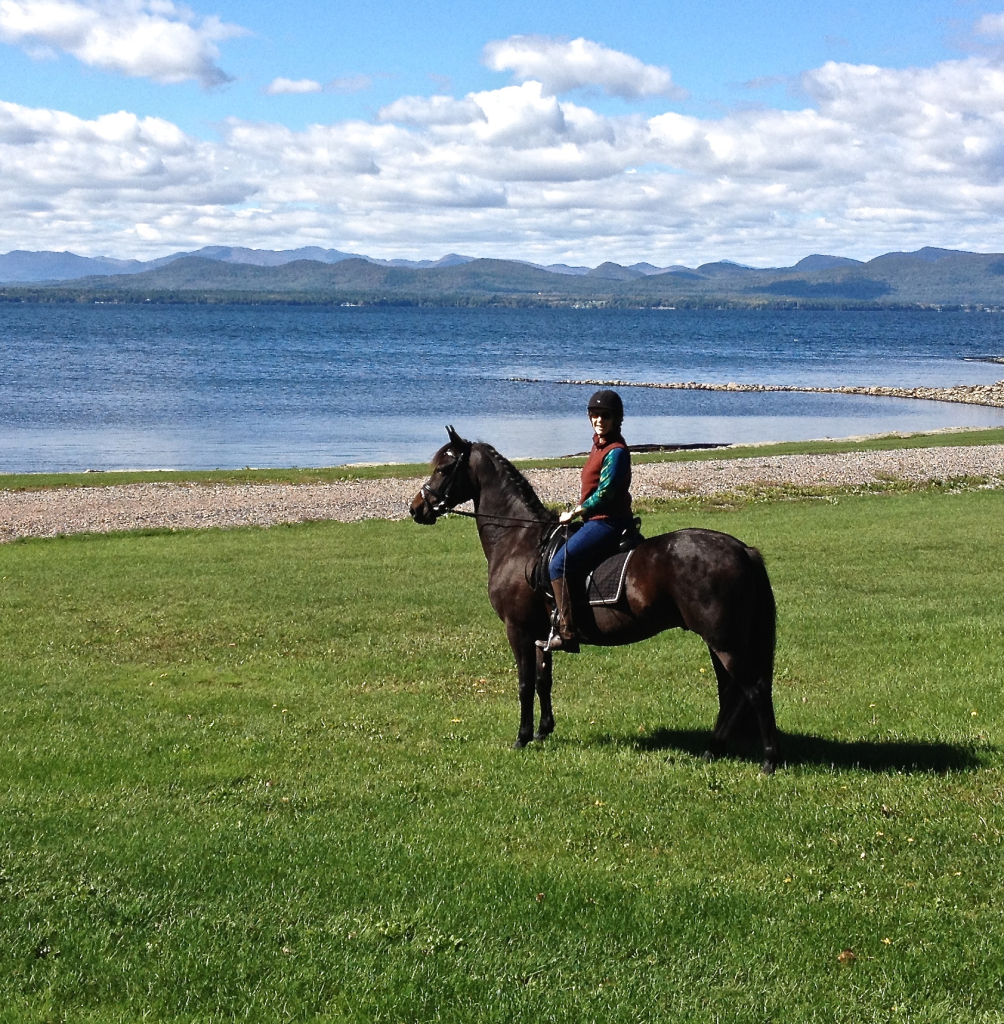 Thank you dear readers, for encouraging me to write the story of my horse, Lucky. I know there are others of you out there who probably can’t understand what all the interest is about, but this story is not only for horse lovers. It is for anyone who wants to, or already does believes in miracles.

Lucky was born at home. My husband and I imprinted him within the first 6 hours, which meant rubbing him all over except where we wanted him to maintain sensitivity, like where our legs would eventually press against him to give him cues while riding. This process of bonding is probably what saved his life.

As a colt, Lucky came along with me on rides without a lead. When he was 5 months, a friend of mine and I rode through a field with him catching up from behind. At one point he stopped to graze and didn’t see that we had walked around the other side of a barbed wire fence. His head came up with a start when he realized we had gone beyond his comfort zone. He cantered towards us, straight towards the fence. I yelled, “Stop Lucky!” but he didn’t understand. By the time he saw the fence it was too late. The wire snagged and twisted his right hind hock as he fell on his back to the ground.

I jumped off of Meg, then 3, and ran over to him. Somehow he sensed this was serious and he stayed still. I told my friend to stay calm and spoke with strong intention to Lucky, saying, “Don’t move.” I left on Meg at a gallop to get some wire cutters from home. When I returned, 20 minutes later, he still had not moved a muscle. I wondered if his leg was broken. Bending down to him I said, “You can get up now, Lucky.” As if on cue, he rolled over and stood up. He limped home with me. His back was twisted, but I realized that the bonding at birth probably saved his life.

Four years later I was riding and driving Lucky. He had had many years of physical therapy but his back was still “S” shaped. I driving him in a van to get his saddle fitted and when I had to stop suddenly. The jolt pushed him beyond his pain threshold. From that moment on he pinned his ears back at any approaching human (except me) and lunged at them, trying to bite or kick.

I was distraught, and asked our good friends, John and Sue Greenall, if they would take him for a while. Sue is a horse whisperer and they have about 10 horses. A week later, Sue called to tell me that of the top 10 most dangerous horses she had ever worked with, Lucky was number 1. She could barely get a halter on him without him trying to bite her. She said the only place on his body where he respected pain was his face. Every other part must have hurt so much for so long that he didn’t even notice if they tried to inflict pain to keep themselves and him safe. They would have to gain his trust that they meant to help, not harm him before he could start his weekly acupuncture, chiropractics and massage.

I went to see him a month later, and they still hadn’t been able to get close enough to give him any treatments. “Perhaps you can hold him while the acupuncturist attempts to put needles in,” she said. I held the lead rope very close to his halter and looked straight into his eyes. Sue cautioned me, “A quick snap of the whip on his forehead will be the only way you can handle him if he tries to bite.” The acupuncturist stepped on a stool next to him and Lucky’s eyes widened.  He struck out with his hind leg and the man jumped out of the way just in time.

Lucky stared at me as if to ask, “What are they doing to me Mom?” I flashed on his accident and tears flooded my eyes. I saw his early suffering as my own, like when I was forced out of the room by my siblings or made to eat alone. In that moment Lucky and I connected and I felt us both relax. We were healing together.

For the next 9 months I came every 4 weeks to monitor his progress. Sue had the genius to put him in a field with 4 other geldings and tell him, “Lucky, you either need to shape up or you’re never going home.” As if he heard her, he emerged from the field and pushed right past her to get on the van. When she told me this story I cried. I knew what it was like to yearn for the herd at home.

He showed demonstrable progress the next month, allowing acupuncture and chiropractics every week. He loved his weekly massage and I could relate. Each time I left he stood at the near edge of the pasture, looking at me as if to say, “Can’t you take me home yet?” It was all I could do to tear myself away.

Come April he developed a benign cyst on his neck, the size of a watermelon. The vet had to lance it. When Sue told me over the phone my first thought was, all the toxins of the physical and psychological pain have come to a head. I knew this was a milestone.

The final test came in May, when Lucky had to cross the stream to eat hay with the other horses. He was deathly afraid of the water. Perhaps it reminded him of the fence that caused his pain. For an entire day he stood on the near side, whinnying for John to bring him hay, for the grass hadn’t grown in yet, and for the horses to rejoin him. Sue and John had the wisdom to let his stomach urge him past his fear.

I did not know this was going on because I was in California doing a form of sand tray therapy, to work through some childhood stories about fearing I could not get past the point of failure. My therapist had a huge collection of miniature animals, items from nature, fantasy figures, and more, on little shelves to choose from. I placed them as my imagination led me. I had just laid a fence on its side in a little valley of sand with a horse straddling either side when my phone rang. It was Sue.

“Lucky just crossed the stream.” She was so excited she was practically tripping over her words. “He held out for a whole day but he finally did it. I think he’s ready to come home.”

I couldn’t believe the synchronicity.  All I could say was, “We really are connected.” I didn’t tell her at the time that I was crossing over to some new place in my own life, as represented in the toy horse over the fence, but I knew that Lucky and I were doing it together, 3,000 miles apart.

In June Lucky came home. He was so happy to get off the trailer he practically backed into me, but he couldn’t run. He couldn’t even trot. The absence of pain in his body felt foreign to him and he had to learn everything again from the beginning. The left side of his barrel had had nerve damage and was so numb he had hundreds of fly bites. But he was home.

Today, after miles and miles of walking, slow trotting, and finally starting to canter again, Lucky can do everything. He rides on trails, does extended trots, canters up hills, drives the carriage singly or in a pair, and can jump over low fences and do dressage. He’s so proud of being able to join the other horses that he has even learned some new tricks. Look at this video of him doing Passage, (emphasis on the last syllable,) which is an upper level dressage move of an extremely elevated trot. He even does a little Piaf! (Prancing in place.) His back is now straight as an arrow.

Lucky’s story is nothing short of a miracle. He has taught me that anything is possible, if you put enough love into it. 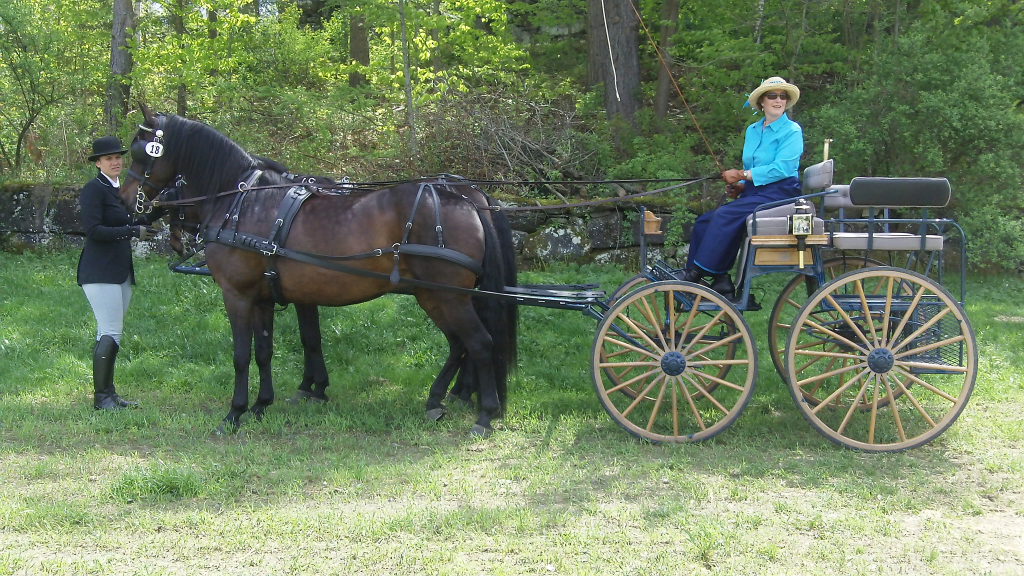 What miracle have you witnessed in your life?