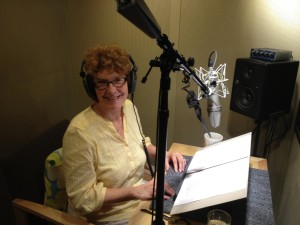 The three and a half days spent recording my memoir for Penguin Group’s books-on-tape have given me a lot of food for thought. I expected I would get emotional at parts that had been hard to write. When packing to drive to New York I decided to choose jewelry that would give me strength to be able to read them. An image came to me of diamonds. They are hard, multi-faceted, and brightly shining. I have two small studs for my ears and one slightly larger one for a pendant. I put them on and drove south. I had never recorded my reading voice before. I had a surprise and an epiphany.

The first day in the studio while reading my chapter, “The Story I Didn’t Want to Tell” I recalled how choked up I got when I first wrote it.  This time I was able to read it without hesitation. Perhaps I had healed the embarrassment of being a Rockefeller.

Then came a chapter about my maternal grandmother, Neva McGrath, whom I called Danda. When I wrote it I felt a lot of anger towards her. She had been mean to my mother and wasn’t nice to me either. I think she preferred animals to children, and males to females. I did not cry when I wrote the story. But this time through I had to stop, grab several tissues, and sip water repeatedly before I could go on. I understood for the first time that she was a victim of those who had gone before her. She didn’t have help with addressing her own wounding so her own trauma impacted the next generation. Unresolved wounds repeat themselves.

Two days later, after all my reading was finished, a friend came to visit at my dad’s house in the country. She thinks in mythic images and told me she had a vision on the drive over. It went something like this:

I am at the edge of a large body of water. I need to get to the other side for some appointments I’ve made. I get into a sailboat but half the way across the wind dies and my sails fall slack. I’m peeved at not being able to make my appointment, but then I remember I lost a ring in the depths, and I distract myself by trying to make a fishing rod. Before I finish, a large fish surfaces with the very ring I’d been looking for, between its teeth. It presents itself to me and I’m amazed that I didn’t even need to struggle to find it. 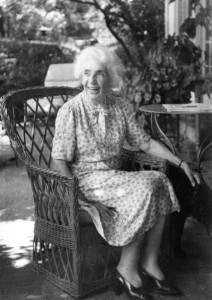 As my friend finished the story I could feel my eyes welling up. I said to her in a flash of recognition, “I just realized that the earrings and pendant I was wearing during the audio taping came from my grandmother McGrath’s ring. I had it reset because I didn’t care for the ring, but I never thought about the stones being from her when I chose the jewelry!”

Stones contain energy. Danda’s jewelry had transformed when I had it reset from a ring. I chose the diamonds unconsciously, but they were already working on me. That day in the studio, I found compassion. Sometimes, all we have to do is reset our story and the picture changes.

This entry was posted in Eileen's Armchair, Personal Growth. Bookmark the permalink.