Stay Open To It All! 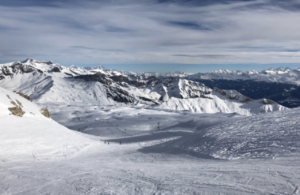 The title of this blog borrows from a poem in Space Between called “The Way.” It turns out to be good advice, especially when traveling.

Since my last blog I have been to Norway to see the Aurora Borealis and to Switzerland for skiing. We saw not a glimmer of green lights in the far north and had but two half-days of skiing out of a week in Switzerland due to wet snow and rain!

Had we stuck tenaciously to our goals both trips could have been sorely disappointing. As it was we had a glorious time with our friends on each adventure, enjoying local food and culture, and whatever caught our attention.

In Tromsö, north of the Arctic Circle, we nosed about in second hand stores and I found a winter parka that I love for only $45.00! (Yes, even Rockefellers love a bargain!) My friends gave me a strip of Swedish embroidered tape they had which another friend later sewed around the sleeves and bottom trim so it now looks like a $600 parka!

In Switzerland, when we weren’t getting lost along mountain meadows in a sudden burst of snow, or taking wrong turns down a mountain and having to skate ski 2 ½ miles on heavy downhill skis to the nearest operating lift, we visited the Gruyère cheese factory, and poked our heads into some art galleries.

One gallery was exhibiting the work of British photographer, David Yarrow, known for his conservation orientation in wildlife photography. My husband, Paul and our friends were immediately drawn to the central photo of the exhibit, called “78º North”. The emaciated polar bear in Svalbard, Norway, is moving away from the camera with its left hind foot raised just enough to expose the black pad and toe marks.

We stood before it and wept. The photograph is an iconic representation of the effects of climate change. It reminded us of why we’re trying through our philanthropic work to help transition the world to clean energy.

Happily we were able to buy the last copy.

By staying open to it all we found unexpected treasures that will have value outlasting a flash of green light or a perfect day of skiing.

18 Responses to Stay Open To It All!