Tired of winter?
Keep your hats on! 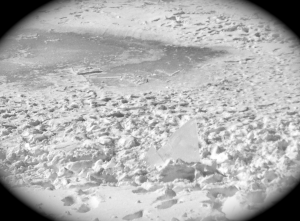 Last week in Washington, D.C., I met with a highly respected climatologist who’s a member of the National Academy of Sciences. Requesting anonymity, he reported new data suggesting that the polar ice cap is not shrinking, and is predicted to extend as far as Montreal and possibly through Vermont. This winter’s extended freeze is just a glimpse of what we can expect to see. The implications for birds and animals, not to mention humans, are surprising, if not disturbing.

According to some evolutionary biologists he’s consulted, bird songs, when subjected to sustained temperatures well below normal, may drop up to an octave. Remember that sweet, melodic “birdie, birdie,” call of the hopeful cardinal courting a mate? I fear it may sound more like a freezing Canada goose.

Another surprising effect of the rapidly spreading polar ice cap might be that animals like moose, deer, and raccoons could increase in size as much as one third. According to Harold Steinberry, Ph.D. at the New Dawn Institute, this is a natural form of accelerated evolution. Increased body mass is necessary to withstand sustained freezing temperatures. It may suggest that the weight gain among human beings in places like North America is a pre-adaptive response to this coming change.

One advantage for people who live in the North Country is we won’t need to rush for our binoculars when viewing wild animals. Moose will achieve the size of elephants. Deer will be as large as racehorses, and it will only take three raccoons to make an entire fur coat!

This leads me to the final point. My sociologist friend, Vera Donahue, predicts that with new technology available, animal rights people will no longer need to protest the use of fur coats. A simple shave of these animals’ beautiful fur will result in rapid re-growth, due to the cold. Raccoon and fox farms are likely to be on the rise as a result, giving a boost to the economy and spurring unprecedented demand for knitted fur.

As humans, it’s hard to know how to prepare adequately for this advancing polar ice cap. My suggestion: Start saving your old clothes and newspapers. My grandfather, John D. Rockefeller Jr., used to line his suits with newspapers in the winter, as they made excellent insulation. This is an economical way to prepare, and it works in boots too.  You might also start knitting earmuffs and nose covers, like I did this winter, for it not only saves money, but also you can size them exactly for your features.

So hold on to your hats. Winter’s coming—year round!

Guess which parts of the above story are true?

11 Responses to Tired of winter?
Keep your hats on!