How does your life help to remove the causes of war? 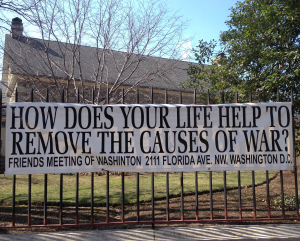 Last week while walking with a friend along Embassy Row in Washington, D.C., a banner in front of a Quaker Meeting house stopped us in our tracks. I took the picture above to remember the words: “How does your life help to remove the causes of war?” I think about the people of Crimea, many of who wish to be reunited with their Russian roots, and others who are fearful of Putin’s invasion.

I believe that scarcity is at the root of war and much of human conflict. Scarcity fuels aggression in an ever-exploding world population, and increases the gap between rich and poor. When people feel scarcity of land, water, food, shelter, safety, or spiritual or family connections, they become aggressive, either outwardly or inwardly. Michael Klare, of Hampshire College, writes in his recent book, The Race for What’s Left: The Global Scramble for the World’s Last Resources, that with our world’s natural resources being extracted beyond reach in easier places, the developing world is stretching its grab to the planet’s most remote regions, such as the Arctic, the deep ocean, and even war zones like Afghanistan.

In feeling scarcity, people use aggression to seek abundance in whatever ways they can achieve. It’s a survival strategy dating back to when we lived in caves. Society tells us that those material possessions – a TV in every room, a closet full of clothes, the latest household toy or car – will heal all. Money has become equivalent to God. We worship material wealth and fame, as if the fact of “having it” is worthy of adulation. When suffering physical, emotional or economic scarcity, the result is the same. Human nature becomes aggressive. In the absence of love we seek power. I wonder in what ways Putin suffered as a child?

Power, like money, does not buy love and compassion. Nor does it rid us of the feeling of scarcity. Inner abundance does.

I would add to the question above: How does your life help to remove the causes of war and aggression, and how can you cultivate inner abundance?

8 Responses to How does your life help to remove the causes of war?