This past week has seen both Passover and Easter. These holidays remind me to think about renewal, rebirth and awe. A few days before Passover I saw a hummingbird feeding its young. I marveled at the speed of its flight and delicacy of the nest. It filled me with awe. I want to share excerpts from a beautiful prose poem, by Brian Doyle.

If you look carefully at the photo below, you can find the hummingbird I saw. 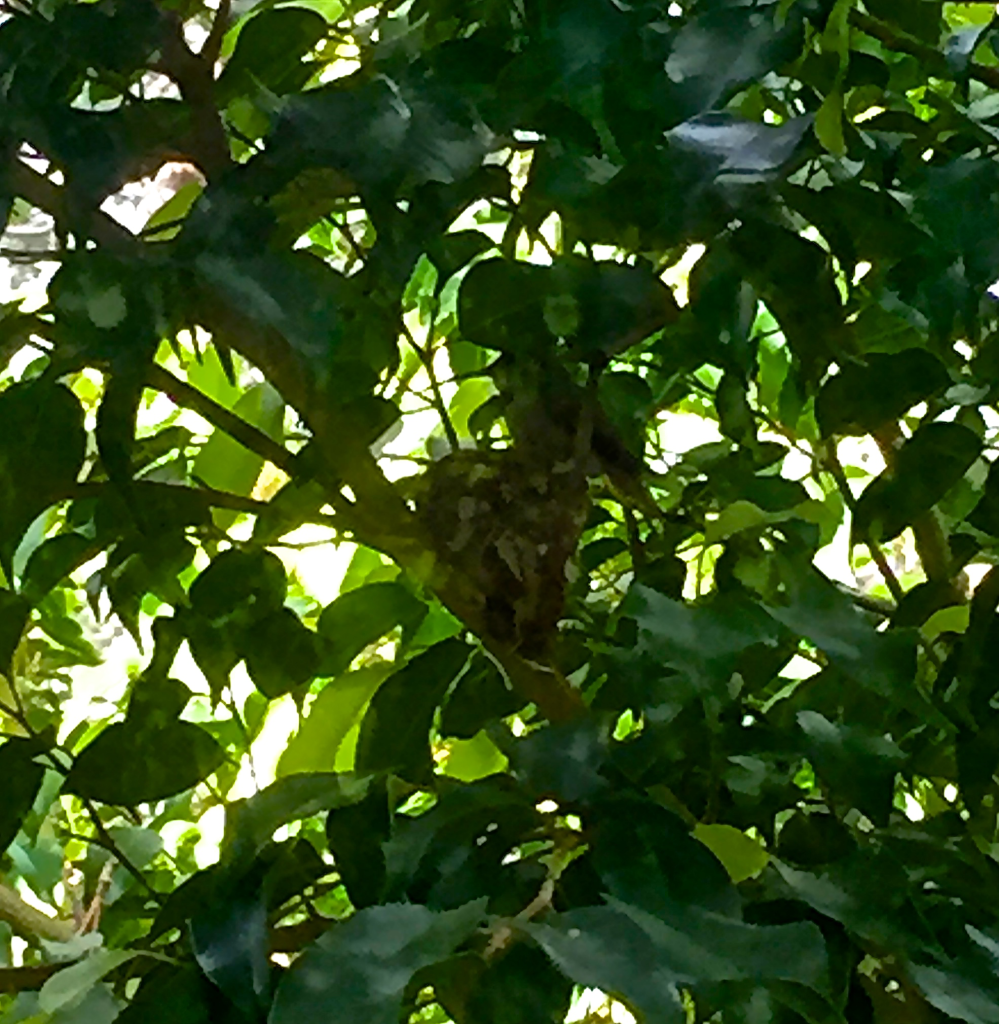 “Consider the hummingbird for a long moment. A hummingbird’s heart beats ten times a second. [It] is the size of a pencil eraser. A hummingbird’s heart is a lot of the hummingbird. Joyas volardores, flying jewels, the first white explorers in the Americas called them, and the white men had never seen such creatures, for hummingbirds came into the world only in the Americas, nowhere else in the universe, more than three hundred species of them whirring and zooming and nectaring in hummer time zones nine times removed from ours, their hearts hammering faster than we could clearly hear if we pressed our elephantine ears to their infinitesimal chests.

“Each one visits a thousand flowers a day. They can dive at sixty miles an hour. They can fly backwards. They can fly more than five hundred miles without pausing to rest. But when they rest they come close to death: on frigid nights, or when they are starving, they retreat into torpor, their metabolic rate slowing to a fifteenth of their normal sleep rate, their hearts sludging nearly to a halt, barely beating, and if they are not soon warmed, if they do not soon find that which is sweet, their hearts grow cold, and they cease to be… …each the most amazing thing you have never seen, each thunderous wild heart the size of an infant’s fingernail, each mad heart silent, a brilliant music stilled.

“Hummingbirds, like all flying birds but more so, have incredible enormous immense ferocious metabolisms. To drive those metabolisms they have racecar hearts that eat oxygen at an eye-popping rate. Their hearts are built of thinner, leaner fibers than ours. Their arteries are stiffer and more taut. They have more mitochondria in their heart muscles—anything to gulp more oxygen. Their hearts are stripped to the skin for the war against gravity and inertia, the mad search for food, the insane idea of flight. The price of their ambition is a life closer to death; they suffer more heart attacks and aneurysms and ruptures than any other living creature. It’s expensive to fly. You burn out. You fry the machine. You melt the engine. Every creature on earth has approximately two billion heartbeats to spend in a lifetime. You can spend them slowly, like a tortoise and live to be two hundred years old, or you can spend them fast, like a hummingbird, and live to be two years old.”

Many of us live in the fast lane, myself included. In this season of rebirth and renewal how do you want to spend your two billion heart beats?

This entry was posted in Eileen's Armchair and tagged nature, synchronicity. Bookmark the permalink.