I Promised You a Polar Bear! 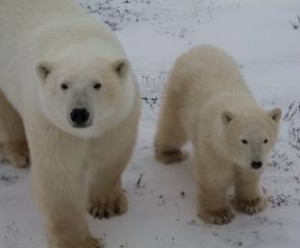 Last week when I was writing my post called “Abundance,” I promised you I would write about my trip to see polar bears in Churchill, Manitoba. I, along with my husband Paul and our longtime friend Holly (who, by the way, created the wonderful illustration in last week’s post) went with a group organized by the National Wildlife Federation during the first week in November, which was part of the annual six-week window when polar bears gather along the southwest coast of Hudson Bay to wait for the ice to freeze. When it happens, they venture out to hunt ringed seals and feed their starving bodies after fasting since the previous July when the ice melted.

A polar bear census in 2000 estimated the bears’ population in the Hudson Bay area near Churchill at 1200. By 2004 this number declined to slightly more than 800.  Scientists have recorded that the ice now takes longer to freeze in the fall and, in most years, melts earlier in the spring. Some attribute this to global warming.

We learned upon arrival that a hungry bear had mauled a woman just one block from our hotel two days before. Temperatures were still above freezing, two weeks later than normal. The bears were starving, and with warmer weather they would have three to four fewer weeks on the ice catching seals this year.

I had dreamt for years of seeing wild polar bears and I wanted to witness them before the ice thaws and they disappear. Here is a poem I wrote:

I approach you now, white Ursa
of the starving frozen north,
with apologies for the weather.
I see you by the edge of ice
awaiting its arrival like
glass dinner plates with seals below.
Something tells me you know
the origins of your woe.

I come here with head bowed
humbled by your fortitude
and my great fortune
to see you close
enough to smell your sour belly,
and hear it growl.
Ursa, I’m not done with you
or the rising CO2
which I have added to.

Teach me your prayers;
show me your cubs and your lairs
and I will weave your hairs
into dream-weavers
above every child’s bed
and each worker’s desk.
For I see you, polar canary bear
sniffing the warming air,
and standing like all of us, on thin ice.

One of the things I value most about polar bears is the reminder that we humans are not on top of the food chain. They will eat us if given the chance! It keeps me humble to know there are animals stronger and more powerful than humans. I want to make sure they are still around for my grandchildren.

Do you want polar bears to continue on this planet?

1.     Expel less carbon by driving and consuming less.
2.     Turn down your thermostats.
3.     Tell your friends and neighbors to do the same.
4.     Vote for representatives who will address climate change and protect life as we know it for our descendants. 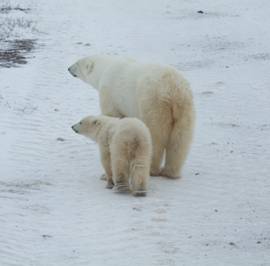 6 Responses to I Promised You a Polar Bear!