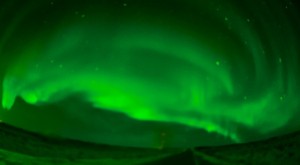 According to the Irish, my name—Eileen—means “light.”  At this darkest time of the year, light is on my mind.

I was aching to see the aurora borealis (“Northern Lights”) when Paul and I visited Churchill, Manitoba in early November.  To see them, we learned upon arrival, is incredibly rare, but I held out a fervent hope that our luck would prevail.  As an expression of my eagerness to see the elusive Northern Lights, I penned a poem’s first two stanzas just before our plane landed in Churchill:

Aurora borealis hear my prayer.
Come and dance with me
from way up there, where
light and dark are married
in sweet celestial affair.

Spread your streamers of blue,
your long, satin gowns of green,
fringed with petticoats in purple hue
and I’ll throw my head back to you,
wide-eyed, and sing as if I flew.

Our day unfolded like a children’s story. First we saw majestic polar bears, arrayed on the ice like clotted cream. Then we slipped through snow behind dogsleds guided by famed musher Dan Daley. After dinner, our guide Pat appeared in the doorway with the news I had been waiting for: “You are one lucky group. The Aurora just began.”

Out the door and onto the bus, we headed out of town to the fields of heaven. Pat stopped the bus and we spilled out, now witness to green light spewing out of a vortex in four strands encircling the sky. I lifted my head and howled with joy. The ululations of my voice mingled with the celestial lights, inspiring the second half of my poem:

Ululations, as it turned out, fell short
of gratitude beneath your vernal spout,
disgorging ribbons from your open port
to stitch a giant bear paw in the sky
as we stood side-by-side, mere human spores.

I hummed and trilled in time with flow
of dancing lights and barking dogs.
I even thought I heard a vibrant lowe
between the flaring braids and spears,
and later, with my head pressed in the pillow
it pulsed through me, as energetic spill.

I see the universe as one gigantic gill.

Tonight as I peer at the sky through my window, I think of all the electric lights that keep us from seeing the natural sparks and flames that breathe into and out of our planet.

Tonight, turn out the electric ones, and open yourself to all those natural lights.

What is the meaning of light to you?

6 Responses to Seeing the Light