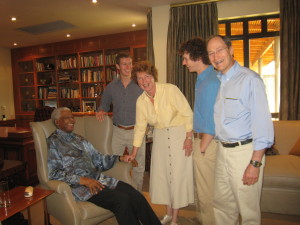 “No one is born hating another because of the colour of his skin, or his background, or his religion. People must learn to hate, and if they can learn to hate, they can be taught to love, for love comes more naturally to the human heart than its opposite.”

How do you part with love? Love never leaves, but the leader who embodied it will be missed by the world. I want reflect on what Nelson Mandela meant to me.

The picture above was taken after an hour with him at his office in Johannesburg in 2008. Nelson Mandela had just turned 90. My husband, Paul, joined me along with our sons, Adam and Danny, who were then 22 and 20, respectively. My sister Peggy had made the arrangements, as she knew Madiba from her anti-poverty work. She told me to call him Madiba, as a sign of respect.

From the moment we entered the room I knew we were in the presence of a man without fear. He sat in his armchair, with his back to the door. I thought it unusual not to face the people entering, yet he seemed completely at ease. He greeted us with an outstretched hand and offered us something to drink. We accepted water and sat down in chairs around him. I spoke first: “My sister Peggy and my father send their love.”

“Yaas.” He said in his deep, resonant voice. “I am very fond of your sister and your father. How is your father?”

I told him he was very well. My dad is three years older than Madiba but he considers him one of his heroes. I told him this.

“Yaas. Yaas,” he said thoughtfully, shaking his head in the affirmative. His voice was soft but gravelly.

We had come prepared with questions. I went first: “Madiba, what is one thing you have learned in your life that you would like to share with our sons?”

He thought a minute. “It is never only one person who makes change and it is important to remember that. It is always a collective effort with one person being put at the head of the pack. One person is necessarily more visible but there are many others who are of equal importance and influence to the cause.”

Today, as I think back on that meeting, I realize he was right. It is never only one person, but it takes one person to initiate change. Nelson Mandela taught the world a lesson in love. Despite 27 years in prison, he was not bitter, for he claimed it helped him to end apartheid.

Here’s what I learned from Madiba: Treat others with respect and love, despite any feelings they project onto you, and you will expand the abundance of love in the world. Love has the capacity to heal some of the deepest wounds.

What impact (even from afar) did Nelson Mandela make on your life?

8 Responses to Saying Goodbye to Mandela